The Governance of Western Public Lands: Mapping Its Present and Future Martin Nie 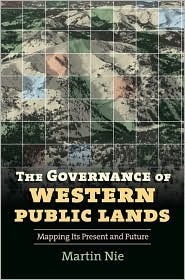 Showing that such conflicts have been driven by interrelated factors ranging from scarcity to mistrust and politics, he charts the present status and future prospects of public lands management in America.Nie looks closely at two of todays most intractable conflicts: the designation of U.S. Forest Service roadless areas and management of the Tongass National Forest in Alaska.

He uses these cases to investigate more inclusive issues about governing federal lands in the West, such as the contested use of science and litigation, lengthy planning processes, and controversial practices of Congress and the president in managing environmental disputes. Along the way, he addresses such other conflict areas as snowmobiles in Yellowstone, bear and wolf protection, fire and forest health, drilling in Montanas Rocky Mountain Front, and federal grazing policy.Nie emphasizes the complicated and often contentious interaction between the branches of the federal government as a major factor in misunderstandings.

He particularly cites the problem of vague statutory language, which tells our public land agencies little about what they should be doing but lots about how they should be doing it. Nie reexamines this confusing body of law and policy, in which the rulemaking process wags the dog and agencies are caught in political quagmires, to show how the pieces fit but more often dont.Throughout the book, Nie considers the factors that make some public land conflicts so controversial, revisits how they have been dealt with in the past, and proposes ways they might be better managed in the future.

Eschewing the single-policy approach to public lands management such as encouraging free markets he instead surveys a diverse array of other available options. His big-picture outlook for the twenty-first century is a bold call for reshaping ongoing conflicts-and for reinvesting in our public lands.

Comments
Comments for "The Governance of Western Public Lands: Mapping Its Present and Future":