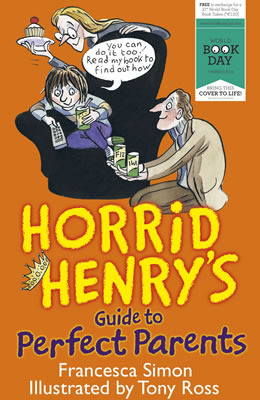 Francesca Simon was born in St Louis, Missouri, grew up in California, and attended both Yale and Oxford Universities, where she specialised in Medieval Studies. How this prepared her to write children’s books she cannot imagine, but it did give her a thorough grounding in alliteration.She then threw away a lucrative career as a medievalist and worked as a freelance journalist, writing for the Sunday Times, Guardian, Mail on Sunday, Telegraph, and Vogue (US).

After her son Joshua was born in 1989, she started writing children’s books full time. One of the UK’s best-selling children’s writers, Francesca has published over 50 books, including the immensely popular HORRID HENRY series, which has now sold over twelve milllion copies.Francesca won the Children’s Book of the Year in 2008 at the British Book Awards for Horrid Henry and the Abominable Snowman.

HORRID HENRY is published in 24 countries and is also an animated CITV series. She lives in London with her husband, son, and Tibetan Spaniel, Shanti.